Carl Sanders sat in seventeen New World Order meetings with heads-of-state officials such as Henry Kissinger and Bob Gates of the C.I.A. to discuss plans on how to bring about this one-world system. The government commissioned Carl Sanders to design a microchip for identifying and controlling the peoples of the world—a microchip that could be inserted under the skin with a hypodermic needle(a quick, convenient method that would be gradually accepted by society).

Big Pharma is officially partnering with the tech industry to pair “immunization” with digital bio-metrics, meaning humans will soon be micro-chipped, tracked, and ultimately controlled through a global identification matrix.

All of this is priming the public for an eventual mandate of microchip vaccinations, which will be required for every individual in order to buy and sell goods.

The ID2020 Alliance, as it’s being called, is a digital identity program that aims to “leverage immunization” as a means of inserting tiny microchips into people’s bodies. In collaboration with the Global Alliance for Vaccines and Immunizations, also known as GAVI, the government of Bangladesh and various other “partners in government, academia, and humanitarian relief,” the ID2020 Alliance hopes to usher in this mark of the beast as a way to keep tabs on every human being living on Earth.

Similar to how cattle are marked with ear tags, this globalist alliance wants all humans to be “vaccinated” with digital tracking chips that will create a seamless monitoring system for the New World Order to manage the populations of the world with ease.

While the ID2020 program’s testing grounds are primarily in the Third World, the group says it’s also now working with governments here in the United States to start microchipping people through vaccination.

Keep in mind that ID2020 is a part of the so-called “REAL ID,” which will soon be required for those who wish to travel. REAL ID will also be used as a backdoor method of implementing mandatory vaccination policies for adults.

There are some obscure references in this video but what he will talk about is the governments plan to track and control everyone. 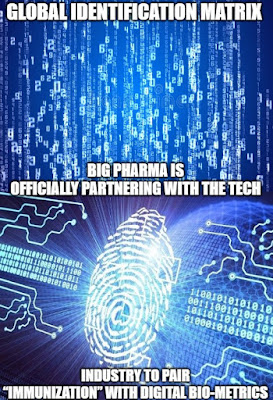