I have many friends around the world, one of them sent me this text below. The person who wrote it wants me to post it on my blog, so honor that wish and post it as a guest entry.

Over to my anonomyous friend:

I hold no political office. I do not govern anyone and no one depends upon me to make wise and proper decisions that determine whether they live or die or to what extent they enjoy freedom.

I am not in a position to put anyone in a dangerous situation or rescue them from one.

The fate of a nation and its people does not depend upon me. But nevertheless, I have eyes and can think, so I have researched the history of Islam because I considered it important for me to know. And I am very alarmed by what I learned.

Yet most in positions of high office throughout Europe have apparently not done what this lowly citizen has done.

The threat confronts them constantly in very dramatic terms. The furor boils all around them, yet they still appear to operate in total ignorance. (Although I have good reason to believe that Angela knows exactly what she is doing.)

I easily found an enormous amount of historical material at my disposal which recorded the history of Islam from its beginnings in 7th century Arabia through its bloody conquests over 14 centuries to the present.

There are four facts that I noticed in particular; the Qur’an, the historical record of their 1400 years of carnage, the difference between real refugees and the hordes of solitary men of fighting age who arrive, and their behavior after they arrive in Europe.

None of this is kept secret.

I learned their past and noticed how it conforms to the present. Yet those who need to know to a far greater degree than I have not bothered to research any of it or recognize the danger.

They apparently feel that they are above doing any real work that might enhance their ability to govern.

After all, they have been elected and that must mean that they already know all that they need to know.

I think that we can rightly assume from this that a sizeable portion of pride and arrogance comes with elected office, and no threat, no matter how grave, can induce the high and mighty to even do the least bit of homework to make an educated decision and properly govern and protect those who have entrusted their lives to them.

If they would take the time, or even instruct their staff to do so for them, to research the history of Islam they would quickly learn that in the Qur’an, Muhamad commands his followers to kill, slaughter and behead all infidels.

There are over 30 surahs in the Qur’an that command this. It is right there for anyone to read.

The Qur’an is a call to war. There is nothing peaceful in there.

Has a single one of these politician idiots read it?

The history of Islam bears out that they take these commands quite literally and have been doing just that for 1400 years, much to the regret of hundreds of millions of innocent victims.

But those who need to know this the most in order to do their job in a manner befitting a well-informed and responsible official, choose to ignore these facts and their sacred duty to represent those who elected them.

The gullible fools shroud themselves in a pious acceptance of huge armies of fighting age men, not refugees as they claim, but young men without families or possessions as all real refugees are, who are intent upon obeying the commands contained in their holy book and which their subsequent behavior confirms as their true intent.

They have invaded with the intent and goal to overthrow and take over our countries and subjugate them all to their “religion”.

To me, it is obvious.

We have devoted centuries to creating and building as good a place to live as possible, only to voluntarily give it to an army of fanatical religious Jihadists whose known intent is to rape, kill, slaughter and behead us, subjugate the rest to Islam and are even busy about this business as we speak.

The world watches you idiots in dismay.

May all you Neville Chamberlains be slaughtered by the very people whom you so stupidly protect and your heads roll down the street and come to a stop in front of your spouse and children.

Then your family will look down at your severed head and say something like “You dumb shit”.

So long my anonomyous guest.

PS. Have you ever wondered why the EU has opened its borders for islamic conquest?

Read here and here. It´s all about money for the NWO elite and oil. And of course, the Coudenhove-Kalergi plan for the genocide of the white people of Europe. The very foundation of the EU. Read here. DS. 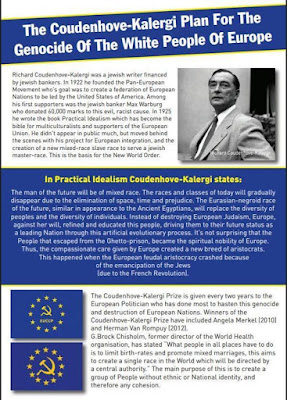